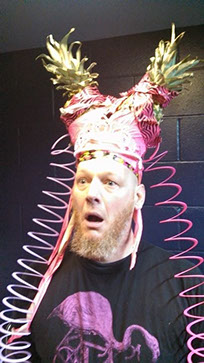 "I guarantee you one thing, if you listen to that record you will be deprogrammed."

"I just witnessed the future of jazz."

—A guy with an upright bass in the basement of Palmer's

"You guys are really fucking weird."

My voice teacher once said "In order to make a living in music you need to either be really good or really bad. Those in the middle starve.” After twenty plus years of writing and performing music with relatively little measurable success, a thought occurred to me. Could I have been going at it all wrong by trying to make "good" music?

Aesthetic beauty in art is not an absolute. It is rather a contextual matter much like politics. Political ideologies do not exist in a straight line. Rather, they exist in a circle where the more they travel from the center, the more similar they become. For example, after years of struggle for civil rights, our society has finally liberated itself to where college students have the civil right to segregation in public schools in the form of "safe spaces."

Could musical aesthetic function in a similar obtuse, circular manner?

Repulsar was formed to test this very theory. Is there a secret trap door on the edge of "horrible" that when crawled through will lead to the promised land of greatness? Repulsar is committed to explore this notion through cheesy drum machines, bass tones that resemble the sounds of farting, loud guitar feedback, quasi-competent soloing and polyphonic, atonal, Tibetan throat singing techniques set to conceptually suspect themes. 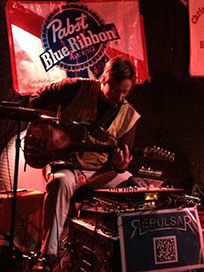 Rock and roll wouldn't exist if not for audiences who like loud, annoying sounds. For those out there who are "size queens" for loud annoyance, Repulsar serves a twelve-inch dose of what satisfies you the most right where it hurts the worst. 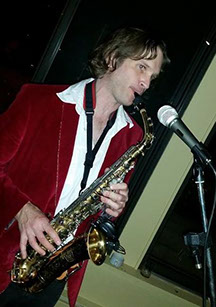 Newt "Sparky" Skink, the shamanistic channeler of the nonsense spewing poopy gods has joined forces with myself (Michael Donahue) in this, our latest exercise in futility. In 2012, Wayne Sayers joined Repulsar and we are now a trio. He plays sax and didgeridoo. Wayne played a number of shows on the same bill as Repulsar with his one man band "Well Trained Monkey". He was invited to play with us as a guest and has been there ever since.

Repulsar live shows feature some notable trademark performance elements. Singer Newt Skink often performs with a pineapple duct taped to his head for reasons not worth sharing. We also have a sure fire way of filling the dance floor. By throwing giant rolls of bubble wrap on the floor, audiences can't resist walking on it.

There are now three Repulsar albums: Repulsar at Remer (2019), Gay Deer Hunter Sex Wagon (2014) and Audrey Seiler Fantasy Abductor (2011). Physical copies can be found at the Stucco Music Store on this site and downloads are available at repulsar.bandcamp.com.

Repulsar at Remer (our latest) appeals to a target audience of Bigfoot.

Though Sasquatch outnumber humans 500 to one, Bigfoot sightings are still a rare occurrence. Why? The elusive Sasquatch are multi-dimensional creatures with the ability to phase in and out of time. When one is spotted, they move backwards to a time before the encounter and hide to avoid detection. Repulsar has composed music for Sasquatch appealing to their ability to move back and forth in time.

Sasquatch feel safe when they hear backwards sounds. Thus, the music on Repulsar at Remer sounds the same backwards as it does forwards. This is a quasi-live album taken from a campfire concert at the Chippewa National Forest near Remer, MN… the self-proclaimed “Home of Bigfoot.”

Remer spelled backwards is Remer. Coincidence? We think not! This music is a blend of backwards and forwards sounds, carefully arranged to be equally enjoyable when heard in either direction.

We predict this will be Repulsar’s breakout album, akin to Cheap Trick at Budokan. Just as Cheap Trick enjoyed newfound success in America due to the hysteria they inspired in thousands of Japanese teenage girls, Repulsar will enjoy newfound success among human audiences due to the hysteria we inspired in the Sasquatch. The tree-knocking echoing from the Chippewa National Forest is confirmation of our triumph.

Interview on the Zeph Report podcast.

Note: The first Sonic Youth EP, released in 1982 on SST featured a side 2 that was side 1 backwards. Though that does sound the same both ways, this release is different in that "all" of the songs contain "both" forwards and backwards content.

Repulsar also appeared on two cassette compilations, both on the E.F. Tapes label. God Bless America (2012) is an experimental noise music compilation where each artist was asked to create their own version of the "Star Spangled Banner". Repulsar's track is called "Americaca". A newer version of the song also appears on Gay Deer Hunter Sex Wagon. Nothing Good Ever Comes From Milwaukee: A Midwest Noise Compilation (2012) features Repusar's cover of the Crucifucks song "Wisconsin". A newer version is also on GDHSW.

CAUTION: Listen to Repulsar tracks at your own risk. They are meant only for those who have the courage to recognize the greatness in bad music.

Rare video from 1991 featuring a very young Newt Skink performing with a pineapple duct taped to his head for the first time.